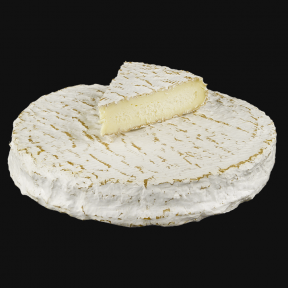 It is made from raw milk that is left to drain slowly. It is a lightly salted soft cheese with a superficial molded rind, and it keeps a dominantly milky aroma. The crust is thin and covered with a white felting dotted with red, brown, or possibly burgundy streaks, and the surface of the cheese can be slightly crimped.

Its texture: Soft and creamy with age
Its taste: Slightly salty
Its flavor: Very strong, becomes stronger with maturing

Considered the father of all Bries, it was the star of the tables of the kings of France since the time of Charlemagne. It also played the lead role in the fable by Jean de la Fontaine: The Crow and the Fox. It is manufactured in its regions of origin: Seine et Marne, Aube, and Yonne due to their wet soil and limestone.
Its story is probably related to that of the Brie de Meaux. In the past, there was no difference between the two products, which were sold fresh.