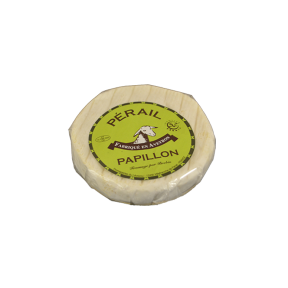 Pérail (orthographic francization Peral or peralh, Languedoc term for cheese) is a French cheese from Aveyron in the Midi-Pyrénée region of France. Pérail is a by-product of Roquefort production. It is only made during a certain time of the year when a family’s herd does not produce sufficient milk to meet the volume requirements of the transformation of Roquefort cheese. Itt is vital for the household not to lose a milking, however small it may be.

Its white-cream rind is fine, slightly wrinkled and it has the shape of a small disk. Pérail cheese matures for 1 to 3 weeks. This sheep cheese has a pleasant aromatic flavor that is well balanced with its mild earthy undertones.

Whether they were selling their milk in Roquefort-sur-Soulzon or not, the peasant families of southern Aveyron (ancestral farming country) often added rennet to sheep’s milk to preserve it in the form of fresh cheese. Then, they would sell their surplus to the market. They ate it fresh, refined or dry. In the nineteenth century, a trade of this family cheese existed. In 1950, its reputation and its sales in farms and markets hardly exceeded its production area. The cheese-making knowledge of the Pérail is ancestral and has been passed down from generation to  generation. Today, Pérail cheese is experiencing a growing success without losing its typical character.