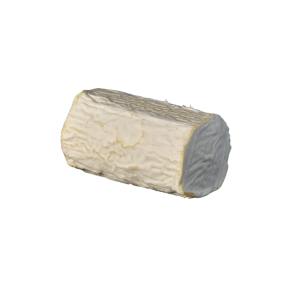 Neufchâtel Bonde is a cheese originating from Neufchâtel-en-Bray in the department of Haute Normandie in the form of a barrel plug, hence its name.

It is a cheese made from cow's milk enriched with cream, soft, unpressed, uncooked and meltingly soft, covered with a velvety white mold forming a thick rind.

Supporters of this cheese state loud and clear that it is the oldest cheese in Normandy. They based their theory on a text from 1035 which refers to the production of cheese in the region of Neufchâtel-en-Bray. In fact, it was "officially" born only in 1543, in the accounts of the Abbey of Saint-Amand of Rouen where the cheese was mentioned for the first time under the name of Neufchâtel.

It is in the nineteenth century that the production of neufchâtel will undergo a strong development. As an echo to the legend of the meeting between Napoleon III and Camembert. Napoleon III, then First Consul, would have received in tribute, a basket of Norman cheeses including a Neufchâtel. It is in this century that its fame reaches its peak and is recognized as one of the best French cheeses.