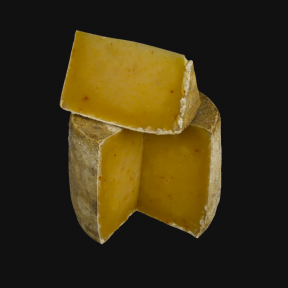 A traditional cheese, it is the embodiment of the land where it is produced, with its concentrated and strong flavors, mixed with fruity notes.
Made in the heart of the Pyrénées Atlantique, the Tomette Brebis is infused wih Espelette pepper powder, which comes from the Basque country. The cheese has a reddish color rind, and it is also the color of the aroma.

It is produced near Espelette, a small Basque village famous for its pepper.
It is only natural that the producer added Espelette pepper to this cheese,and he also added red pepper.

Its taste: Subtle and powerful

It is between the Pic du Midi d'Ossau and the Iraty forest, in the Basque Country, that the Pure Sheep Pyrenees cheeses were born. Derived from an agro-pastoral system, sheep's cheese was an exchange value, the first source of income for the shepherds on that territory.

The pastoral tradition produces a perfect Basque cheese and provides a valuable activity for the Pyrénées mountains.