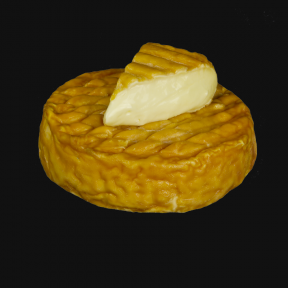 Epoisses cheese is in the shape of a 10 cm diameter disc with and average thickness of 4 cm and weighs about 300 g. Epoisses cheese matures for two to three months in a damp cellar where it is washed. Nevertheless, Epoisses cheese ripening lasts a month if its washed with marc de Bourgogne.
The Epoisses rind is smooth or slightly wrinkled and shiny, and its color ranges from orange ivory to red brick, depending on its maturation time. Its iconic red color comes from yeast and ferment; the use of dyes is prohibited. Its pulp is light beige on the perimeter and white in the heart.

Its texture : Creamy, supple
Its taste: Very tough, strong according to age
Its flavor: Frank, subtle, balanced with notes of dried fruit

At the start of the 16th century, according to oral tradition, the village was home to a religious community who began production of the cheese. When the community left, they bequeathed to local farmers a legacy of value: the recipe. It is in small farms of Auxois that this exceptional cheese then drew its history and development.

By taking over the production of the “past” cheese, women farmers in the region gradually established a unique know-how, improving the manufacturing quality, they made their product known in other regions, helping to solidify its reputation.