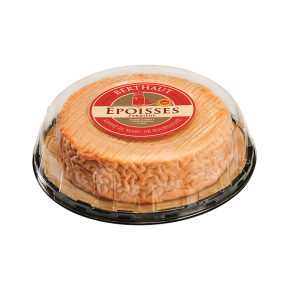 Epoisses cheese is a unique soft cheese with a lactic curd. Its rind is smooth,or slightly wrinkled and shiny, and its color ranges from orange ivory to red brick, depending on its maturation time. Its iconic red color comes from yeast and ferment; the use of dyes is prohibited. It is washed with Marc de Bourgogne.

Born 500 years ago in Burgundy, the name of Epoisses cheese received its name from the city in which it was made. Epoisses was imported to the king’s court by the Comte de Guitaut, one of Louis XIV officers of the wardrobe, where it became very popular. Epoisse became Napoleon’s favorite cheese. He discovered at the same time as what would become his favorite wine, the famous Chamberlin. It is true, the two form a perfect alliance.

In 1956, Robert and Simone Berthaut re-launched the production of Epoisses, which was in the process of disappearing, using traditional skills and a secular recipe. To achieve its quality requirement, the cheese matures for five weeks and is rinsed gradually with Marc de Bourgogne.