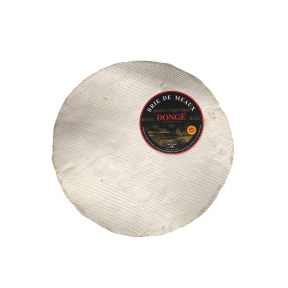 Ancestor of all the Bries, after being noticed in the Fable of La Fontaine, the raven and the fox, the Brie was also the star of the tables of the kings since the time of Charlemagne. Made in its region of origin, in Seine and Marne, Aube and Yonne on wet and limestone soils.

Also molded by hand, the bottom of the mold is lined with rush, which marks the crust of streaks Bries.In the first maturing days, they are turned several times to facilitate the draining and then go to the dry salting stage.

Brie de Meaux is said to have originated from the Notre-Dame-de-Jouarre abbey.

This cheese was awarded "king of cheese" by Talleyrand during the congress of Vienna whose closing banquet took place on June 9, 1815. Previously Talleyrand claimed that there was no cheese like the Brie.

Originally, the cheese was produced only in the region around Meaux, but from 1953 the production area extended east to the Meuse. The registered designation of origin (AOC) is obtained on August 18, 1980.