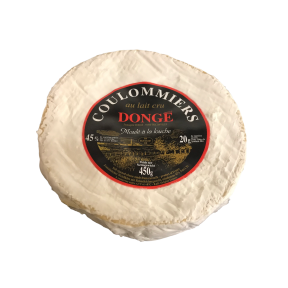 Coulommiers is a cheese from Coulommiers in the Seine-et-Marne region of Franceknown for humid and calcareous soils.

It is a soft ripened and uncooked cheese made from cow’s milk, composed of 45 to 50 percent fat. Its salted dough has a fat content of at least 40percent.

The current Coulommiers - sometimes called "brie petit moule" - is descended from the medieval cheese made to solve the transportation issues of the larger bries which were weakened by their size. It is smaller and thicker than the Brie de Meaux (which can reach a diameter of 40 centimeters) and has a diameter of 13 to 15 centimeters, a thickness of 3 centimeters and a maximum weight of 500 grams.

In the Middle Ages, cheeses were made in the Brie canton and they are sold at fairs, which helped increased local production and popularity. It was not long before this cheese could be found on the tables of the lords of the area, if not the great dignitaries of the kingdom.

In the 19th century, the introduction of a microscopic fungus called Penicillium Candidum revolutionized the manufacturing of cheese, providing its current characteristics.

In the second half of the century, the "petit coulommiers" really took off after its presentation at the Universal Exhibition of 1878.