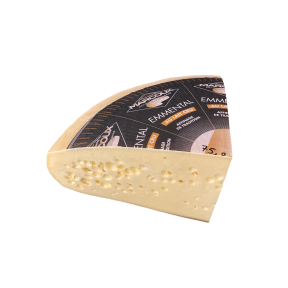 It was called a Gruyère for a while. The Emmental producers from East-Central France are located in 13 departments including Haute-Marne.
The French East-Central Emmental matures for at least 12 weeks, according to tradition.
The distinctive features of Emmental are its "eyes" (holes). To get the holes to form, the cheese (during the 3 maturing months) goes from a cold cellar (7 ° C) into a warm cellar (24 ° C) and finally ends into a 20 ° C cellar.

Its texture: Supple and firm at the same time
Its taste: Lighly milky
Its flavor: Sweet and spicy flavor

East-Central France traditional producers of Emmental (Vosges and Jura, to the north of the Alps) have chosen to produce under the Label Rouge specifications. Owned by the French state guarantees superior quality compared to a regular emmental.

French East-Central Emmental is subjected to strict specifications, ensuring traditional production methods. Certified characteristics: made from raw milk from cows feeding on grass and hay without fermented products; at least 12 weeks of maturation according to tradition - and origin: milk production, production and maturation of cheese must be made in the geographical area defined by the IGP specifications, historical area of manufacturing Emmental cheese in France since the late 19th century.