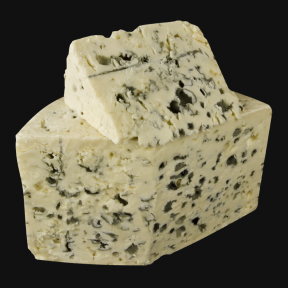 Roquefort belongs to the blue cheese family.
It is the most consumed cheese in France after the Comté and it is also one of the most renowned blue cheeses with Gorgonzola and Stilton. Roquefort cheese melts fully in the mouth and leaves a pleasant taste of salt and mold. Its very typical character makes it one of the great French cheeses.
The Roquefort matures for at least 3 months in the fresh and damp natural caves of the "Combalou" mountain. The cracks in the rock serve as natural ventilation. Roquefort has a cylindrical shape of 20 cm in diameter and is about 9 cm thick. It weighs between 2.5 and 2.9 kg.

The mold that gives Roquefort its distinctive character, Penicillium roqueforti, is found in the soil of the local caves and has the ability to ferment the cheese.

Traditionally, the cheese makers extract the mold by leaving rye and wheat bread in the caves for six weeks until it is consumed by the mold. The interior of the bread is then use to seed the Roquefort, which is done with a needle. After 4 weeks of maturing, the cheese is wrapped in aluminum foil to prevent pests from eating them.

Legend has it that this cheese was created after a shepherdess distracted a young shepherd. The shepherd went in pursuit of the girl, forgetting his rye bread and feta cheese in the Combalou cave where he was resting. When he returned to the cave, he found his meal covered with a blue-green mold. Hungry, he tasted the cheese and feasted. The mold, in combination with the ventilation of the cave, had transformed his Lacaune ewe cheese into Roquefort.

It appears that the first mention of Roquefort cheese was in 1070 in Carolingian texts. The history of Roquefort then remains closely linked to Roquefort-sur-Soulzon and the Combalou mountains thanks to King Charles VI, who, in the 15th century, granted a monopoly for the ripening of the cheese to the people of Roquefort, thus protecting the caves. During the Age of Enlightenment, Diderot consecrates Roquefort by awarding him the title, “king of cheeses.” In 1925, Roquefort cheese was the recipient of France’s first AOC. To date, it has European recognition as an AOC cheese, which guarantees the origin of a product.