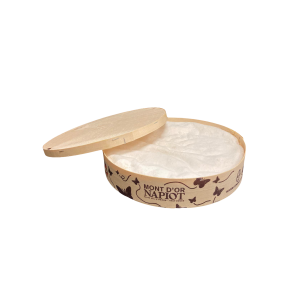 Milk collected the day before and placed in large vats is set to get the rennet curd. It is heated to 40 ° C for a very short time. After being stirred, it is cast in stainless steel molds and pressed. After removing the mold and cutting it, it is bent with a spruce strap harvested from the Jura forests.

Placed on spruce boards, The Mont d’Or spends 21 days in cool and damp cellars being rubbed with a moistened brined brush and turned daily.
At the end of maturing, it will be placed in a box made of spruce that appears smaller than the cheese in order for the crust to wrinkle like the mountains which it pays tribute to.

It is a seasonal cheese, it is eaten warm between September 10th and April 10th.

From Franco-Comtoise origin, it dates back to the late Middle Ages. While the cows spent the summer grazing outdoors, in the winter they were put into stables. Fed hay, cows gave less milk than in the summer and it was difficult to collect due to climatic conditions, therefore, farmers decided to make their own small cheese. It was called "wood" or "cream" cheese and then the Mont d'Or, referring to the highest pic of the Jura hilly area.