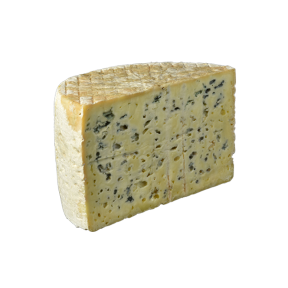 This blue cheese, made from raw cow’s milk, draws its aromatic power, its unctuous consistency and all the intensity of its flavor in the heart of the Aveyron terroir, from the Causses heathlands to the slightly richer pastures of northern Aveyron and Lozere.

Its particularity is to be refined in limestone cellars, these caves are exposed to the north and are ventilated by "fleurines" natural chimneys formed in the cliffs. These "fleurines" that allow the cheese to blossom and develop its blue veins.

Flavor: tasty but without bitterness

The Bleu des Causses shares an ancient history with the Roquefort, in a time where the cheese was made from mixed milk from a cow and a sheep, or pure milk from one or the other, based on the season and the cheesemaker. In ancient times, Pliny the Elder mentions in the 11th tome of his “Natural History,” the cheeses of Mont Lozère and Gévaudan.

In the Middle Ages, Charlemagne tasted a parsley cheese at a stop in Albi.

The creation in 1926 of  "Bleu d'Aveyron" cheese with cow's milk, is the result of the end of the "bastard cellars" in southern Aveyron, where the farmers refined ewe cheese and sold it like Roquefort cheese. Following numerous lawsuits for counterfeit the law of July 1925 specifies what a Roquefort cheese is, reserving this name to cheeses exclusively made with sheep's milk (Lacaune breed) and refined in the cellars of Combalou.