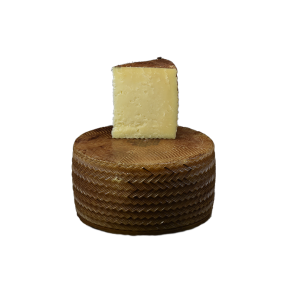 Manchego is a Spanish cheese made with milk from the ‘Manchega’ breed of ewe; it is produced in the region of Castile La Mancha (a large part of the provinces of Albacete, Ciudad Real, Cuenca and Toledo.)

The rind is a yellow/brown color, the pate can be white to ivory yellow, and it has aromas of ewe’s milk, with a slight piquant and salty flavor. This cheese is one of the most well known and most exported Spanish cheeses.In Spain they eat the cheese with quince.

This cheese has a pressed pate, which is firm and compact, with unevenly spread small holes. It is cylinder shaped with flat faces.

Manchego was produced and consumed a number of centuries BC.

The history of Manchego cannot be told without mentioning the famous work ‘Don Quixote’ by the writer Miguel Cervantes. This book is, without a doubt, one of the reasons that Manchego cheese is so gastronomically important, and popular.
La Mancha was named by the Arabs as ‘Al Mansha,’ which meant ‘land without water,’ a name which perfectly described the harshness of the climate. The breed of Manchega ewe gives the milk used for the production of Manchego.