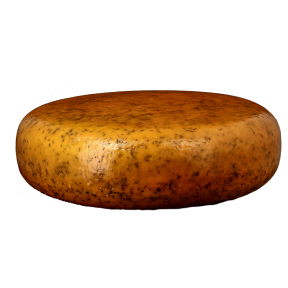 Gouda is sometimes flavored with cumin.

In the Middle Ages, cheese production is in full swing and the peasants of Friesland are producing the cheese for the court of Charlemagne. The growth of Gouda accelerates in the 16th and 17th centuries when the Dutch merchant marine sails the seas all over the world.

The Gouda with cumin dates back to the 14th century.

One of Gouda’s qualities is that it holds up pretty well,therefore, it was used to feed the crews of the ships and it was also used for the trade. Our northern neighbors were known as a cheese region as early as the 18th century.


Currently, Gouda is available in virtually every country in the world and is produced on a large scale.