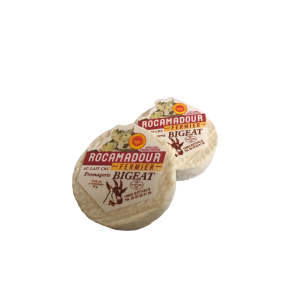 Rocamadour is a goat cheese made with raw whole milk, in the form of a disc. It appears white to ivory cream, its striated skin has a slightly velvety appearance.

Fondant and creamy, it releases subtle tastes of cream and butter with a slight goat smell.

It is matured for six to seven days to give it a soft and creamy goat note.

Texture : from soft to firm

The history of the Rocamadour cheese goes back to the introduction of goats in the region during the Arab invasion in the Middle Ages.

This goat cheese is made in the Aquitaine region and more particularly in Quercy. In his book "Le Vieux Quercy," the diocesan archivist of the Ministry of Education wrote in 1929 that "Only Rocamadour of the Causse area has a delicious cheese that is unknown in other regions.

The region, with its world famous religious site (Cité de Rocamadour) located on the road to Saint Jacques de Compostela, has always attracted a large number of pilgrims who have contributed to the notoriety of the small cheese.