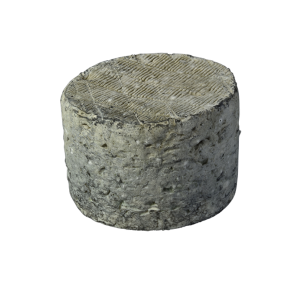 Persillé de Chèvre is an original farmhouse blue cheese.
It has the creamy and fatty texture of a Fourme, as well as the same strong flavor, but it has these aroma of goat cheese!
It is veined with blue or green mold in a uniform manner. Its friable paste oozes, but must be "buttery," that is to say unctuous and well blended. The cheese has a sweet cream undertone with notes of earth and salt. Its rind is coated with a vegetable ash.

Located on the edge of the forest of Rambouillet, the Ferme de La Tremblaye dates back to the XIX century. At first, they were farming cereals and livestock, then in the 70s, they started producing cow's milk and cheese.The cheese is a traditional farmhouse cheese produced locally from the milk of the alpine goats according to the traditional methods. Fruit of an artisan’s work, the curd of the blue-veined cheese is sliced and mixed by hand, then molded and turned by hand in cellars.

In the category Patrimoine Francilien, the Persillé de Chèvre unanimously seduced the members of the jury - a clear signal, for an exceptional cheese.