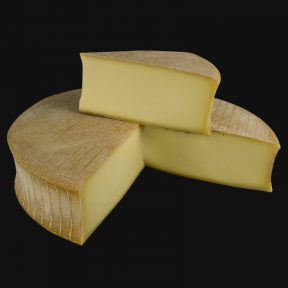 Abondance is a cheese from Savoie, it’s made of whole milk from a breed of cow called "Bountiful," slowly coagulated at a temperature of 27 ° C. It is an AOC cheese since 1990.
Abondance is produced in small manufacturing workshops called "fruitières."

Abondance cheese matures at least three months on spruce planks in cellars after being worked on by hand.

Texture: Firm but supple, it melts in the mouth
Its taste: Salty with a touch of bitterness
Its flavor: Fruity, slightly salty

Twice a year, we taste and select the best wheels, and put them aside for our existing and new customers.

In the 7th century,entrepreneurial monks from the Abbey of Sainte Marie d’Abondance started an economic activity in the Abondance Valley situated in the north of the Haute-Savoie region. They began producing Abondance cheese with rich cow’s milk, which is not only the name of the cheese, but also of the breed of cow whose milk is used to produce it. The Abbey was the official supplier of Savoyard cheese for the election of the Pope in Avignon.

Production is done by hand and takes the expertise of master cheese makers. The curd is broken by hand, put in a piece of linen, and then tied in order to let the whey drip out.