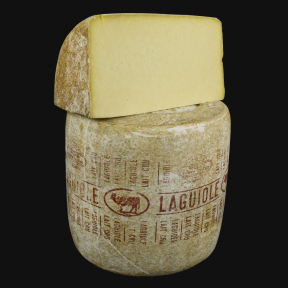 Laguiole has always been a “fromage de garde.” For a long time its production was seasonal, and it benefited from a cold storage technique.
The dry maturation of Laguiole cheese transpires in a damp cellar for three to six months.
The beautiful pale yellow, creamy texture of the Fourme de Lagioule is made with the robust Aubrac cow’s milk collected in the mountains from late May to mid-October.
Laguiole has a cylindrical shape of 40 cm in diameter, 35-40 cm tall and weighs between 30 and 40 kg.
There are similarities between Cantal and Laguiole, as they are in fact cousins, both uncooked pressed cheeses, molded into fourmes of a respectable size, but they are not twins.
Cantal is a cheese that can be eaten relatively young, while the Laguiole, traditionally kept at high altitude, has positioned itself as a “fromage de garde.” The AOP requires at least four months maturation and today most of the production is sold between 9 and 18 months.

Its texture: Supple, melts in the mouth
Its taste: Milky and intense depending on age
Its flavor: Strong with nutty flavors

Dating back to the 15th century, at the time of the monks of the Aubrac plateau, they set up pastures for cattle bearing the same name. They were inspired by the methods of the Haute-Auvergne cheese to make their own: Laguiole is pronounced LAYOLE.

Protected by the AOC since 1961, the Laguiole was traditionally made in burons in the mountains at the time of transhumance.
Milk is collected every day, it is worked by hand in tanks and then subjected to a pressing cloth. Then it is placed in a mold and stamped with a bull on one side, the symbol of the village of Laguiole.
After maturing between 4 and 24 months, its rind becomes brown, which  gives it a strong and rustic taste, that lingers on the palate.