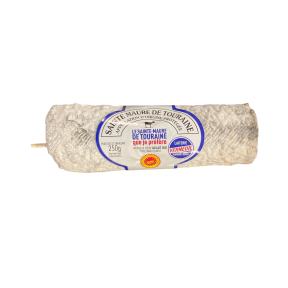 Mentioned in 1841 by Balzac, it is easily recognized by the rye straw placed historically in its center to prevent the cheese from breaking. Because it was counterfeited,this straw bears the name of the cheese and the identification number of the cheesemaker. The rye straw is therefore a guarantee of quality and authenticity. Ash-coated with charcoal mixed with salt in order to dry the surface, as they exude liquid in the days following their removal from the moulds.

The history of this cheese is rather obscure, but it seems that the cheese was first made way back during the Arab invasion of France, when the Arabs introduced goats to this region of France. After the defeat at Poitiers, lots of the Moorish soldiers  stayed in the country and moved up north in the search for hospitable land.
Another legend tells that the women Arabs, abandoned after the defeat at Poitiers, taught the inhabitants of the region how to make this cheese. This legend explains the name sainte-maure de Touraine. Proven by archaeological evidence, smallholds of goats were present in Touraine well before the 8th century.