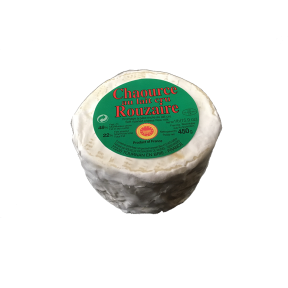 The Chaource is a soft cheese made from cow’s milk whose composition has not been modified, there is no addition or subtraction of fat or protein.

The centre is soft, creamy in colour, and slightly crumbly, and is surrounded by a white Penicillium candidum rind.

Its paste is slightly salty, unctuous, supple and quite firm. It has a slight smell of mushroom and cream and has aromas of hazelnut on the palate.

Chaource is a very old cheese. There are traces of it in the fourteenth century, Marguerite of Burgundy requested it at her table and it was presented to Philippe Le Bel during his stay at Chaource.

It was first produced by the abbeys and commanderies in the region which owned land needed to feed livestock and production of milk and cheese. The women of the region took over this know-how during the seventeenth and eighteenth centuries, to produce cheeses intended solely for family consumption.

Cheeses that were not eaten were sold in the markets. Most of the time, the cheeses were collected by cossoniers (cheese merchants) who sold them on the local markets but also on the main French markets.