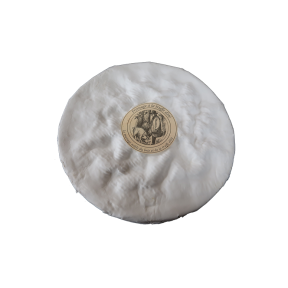 The pure taste of the truffle is in perfect harmony with the delicate texture of the Brie de Meaux.

This exceptional product is made from a Brie de Meaux split in two, topped with a preparation of black truffle and mascarpone, then closed.

Brie aux Truffes is one of the most delicious and decadent cheeses you can have.

Brie de Meaux is said to have originated from the Notre-Dame-de-Jouarre abbey.

This cheese was awarded "king of cheese" by Talleyrand during the congress of Vienna whose closing banquet took place on June 9, 1815. Previously Talleyrand claimed that there was no cheese like the Brie.

Originally, the cheese was produced only in the region around Meaux, but from 1953 the production area extended east to the Meuse. The registered designation of origin (AOC) is obtained on August 18, 1980.