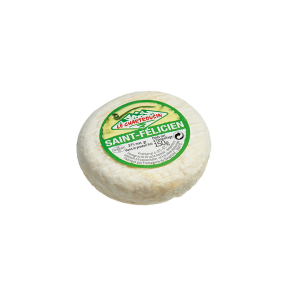 The Saint Félicien is a soft cheese with a flowery rind originally from Dauphiné. It is a close cousin of another Dauphinois cheese, Saint Marcellin.

It was originally made with goat's milk, but now it is most often made with cow's milk.

Invented at the beginning of the 20th century by a Lyonnais creamer to use unsold milk and cream, Saint Félicien's recipe is strongly inspired by that of Saint Marcellin. But it's a bigger and creamier cheese, a softer taste.