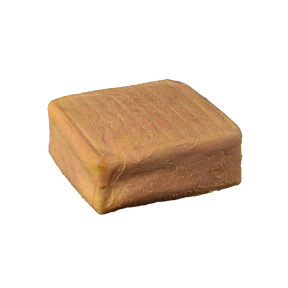 Maroilles belongs to the category of soft cheeses and washed rind: its production technique is similar to Pont Léveque and Munster, but it has a special flavor that can only be found in Thiérache.

The curd is shaped and salted before being removed from its mould. This "Maroilles blanc" is dried in a ripening room where it is covered with a natural flora, the geotricum.

It is said that "it is the sweetest of strong cheeses"

The cheese is then brushed and washed and cellared for at least five weeks, though periods of up to four months are not uncommon, giving it its flavor and its original aroma. During this time, it is turned and brushed at regular intervals,Maroilles then presents a beautiful natural red crust due to the surface ferments and a beautiful full, blond and unctuous paste. It has a strong earthy aroma.

The maroilles comes from a cheese made in the seventh century by the monks of the Abbey of Maroilles, the craquegnon.

In 960, at the request of Enguerrand, the bishop of Cambrai, the cheese was refined longer, and soon took the name of maroilles. It was one of the products given to the abbot in payment of the tithe.