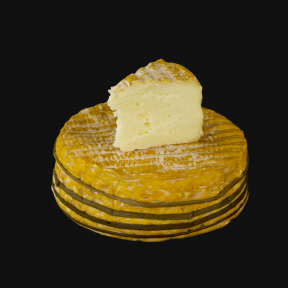 The Livarot has a cylindrical shape, 11 to 12 cm in diameter, 4 to 5 cm thick, and weighs between 350 and 500 grams. It is wrapped in 5 rings of dried reed mace (an aquatic plant produced only for this use) to hold the cheese, which tends to sag due to its low fat content. For this reason, it has been referred to as "The Colonel" as the rings resemble the stripes on a colonel’s uniform.

Maturing of the Livarot lasts 3 months in damp cellars and it is washed with salt water.

Its texture: Soft but not runny
Its taste: Strong to very strong, depending on maturation
Its flavor: Intense and strong smell

Livarot is one of the oldest cheese varieties from Normandy. In the 17th century, the Pays d'Auge began producing this cheese, which took its name from the village of Livarot near Lisieux. It was the most consumed cheese in the Normandy region in the late 19th century and was described as a "poor man's meat" because of its highly nutritious qualities.

To distinguish the Livarot cheese from two other famous Norman cheeses (Camembert and Pont l'Eveque), the cheese maker washes the cheese with water and roccou (natural color) to give it an orange hue.