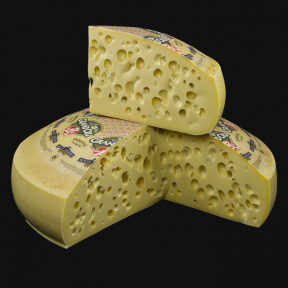 It was called a Gruyère for a while. The Emmental producers from East-Central France are located in 13 departments including Haute-Marne.
The French East-Central Emmental matures for at least 12 weeks, according to tradition.
The distinctive features of Emmental are its "eyes" (holes). To get the holes to form, the cheese (during the 3 maturing months) goes from a cold cellar (7 ° C) into a warm cellar (24 ° C) and finally ends into a 20 ° C cellar.

Its texture: Supple and firm at the same time
Its taste: Lighly milky
Its flavor: Sweet and spicy flavor