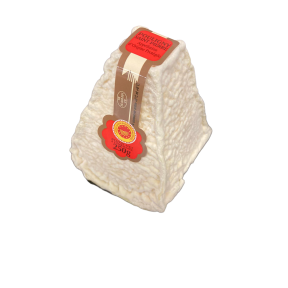 Pouligny-Saint-Pierre has the shape of a pyramid and has a square base of 6.5 cm wide, is around 9 cm high, and weighs 250 grams (8.8 oz). Maturation lasts between 3 to 5 weeks in a cool and humid ventilated cellar. There are two different kind of maturation for Pouligny-Saint-Pierre cheese:

In the 18th century, wooden and rye straw was used to give it its characteristic shape which separate it from other goat cheeses produced in France. The name of Pouligny-Saint-Pierre cheese comes from the locality of Indre near which was installed the first farmhouse cheese collector and its workshop.

The production area of Pouligny-Saint-Pierre cheese is called "land of a thousand lakes" for its many water bodies lining the plains of woods and heathland. The climate of the region, warmer and dry than that of the surrounding areas, is favorable to the breeding of short and brown hair goats. Moreover, the singularity of the flora, mainly composed of cherry, moor and sainfoin, gives the milk a remarkable scent.